Migraine headaches are estimated to cost the U.S. over $17 billion each year. While it is clinically recognized that migraines can be related to cervicogenic conditions, the exact nature of this relationship is unknown. This study set out to test the effectiveness of chiropractic treatment for migraines.

123 participants diagnosed with migraines according to the International Headache Society standard completed the study. Each participant experienced a minimum of 1 migraine per month, and had at least 5 of the following indicators: inability to maintain normal activities/need to seek dark and quiet, pain located around the temples, "throbbing" pain, symptoms of nausea, vomiting, aura, photophobia or phonophobia, migraine triggered by weather changes, migraine worsened by head or neck movement, diagnosis of migraine by a specialist, and a family history of migraine.

The study consisted of three stages. In the pretreatment stage, researchers collected data on migraine incidence, intensity, duration, disability and use of medications, this data was used as a baseline to compare with study results and data collection continued throughout the trial. For the second stage of research participants were split into a control group (40) that received a placebo treatment using electrodes and an experimental group (83) that received a maximum of 16 treatments of chiropractic spinal manipulative therapy (CSMT). The last 2 months of the study involved data collection for comparison purposes.

Results showed that those that received chiropractic treatment had significant improvement in migraine frequency, duration, disability and lowered medication use in comparison to the control group. Improvements in migraine frequency and duration for the chiropractic group are illustrated below. The area of greatest improvement was medication use, with a significant number of participants reporting that their medication use was down to zero by the end of the trial. Five participants reported that migraine symptoms were worse after 2 months of CSMT, but they did not report intensified symptoms at the post treatment stage.

The authors report that their study with a 6-month duration is more valid than some previous studies because studies with shorter durations are too short to allow for the cyclical nature of migraines. Limited sample size and lack of consideration for what aspect of CSMT caused the improvements are some limitations of this study. Researchers also suggest that an improved study method might be to treat the control group with a sham form of CSMT rather than a treatment that does not mimic chiropractic. Despite some limitations this research adds to the body of evidence that suggests chiropractic manipulative therapy can be an effective treatment for migraine and headaches. The authors conclude:

"A high percentage (83%) of participants in this study reported stress as a major factor for their migraines. It appears probable that chiropractic care has an effect on the physical conditions related to stress and that in these people the effects of the migraine are reduced. However, further studies are required to assess how chiropractic SMT may have an effect on migraine morbidity." 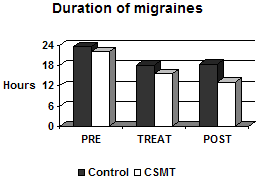 Please fill out your name and email address, and we will get in touch with you as soon as possible.